from the National Association of Educational Broadcasters (NAEB).

Labor and the NAEB 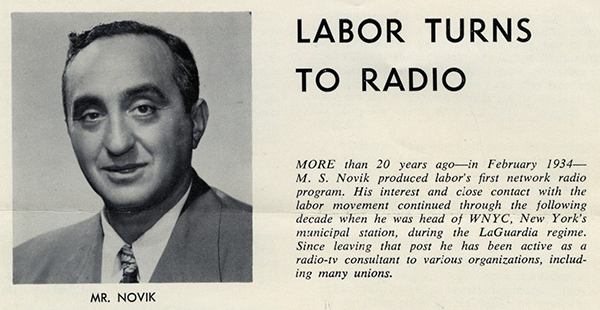 Organized labor and educational broadcasters often found common cause in the US. Along with others, unions and educational broadcasters joined forces in the late 1920s and early 1930s to resist a regulatory paradigm that favored commercial radio. Yet, as documents surfaced through Unlocking the Airwaves reveal, the relationship between organized labor and educational television extended beyond forms of mutual solidarity. This exhibit explores that relationship through the work of Morris Novik, an NAEB leader who, in the 1950s and 1960s, was critical in negotiating relationships with trade and talent unions in the noncommercial television sector and in discerning how and to what degree labor would factor into the imagined public that educational stations would serve.

Origins of the NAEB and Educational Media 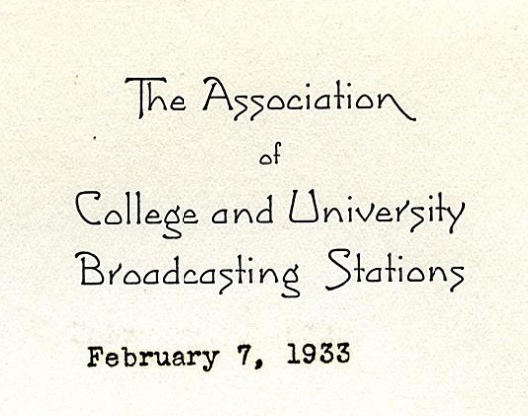 Affiliates of the National Association of Educational Broadcasters (NAEB) built American public media between 1925 and 1967, making it one of the central trade organizations of American media history. Originally founded in 1925 as the Association of College and University Broadcasting Stations (ACUBS), the educational technologists of the NAEB sought to utilize radio to increase equal access to education. Its history gives us an opportunity to trace the key players, events, and content that engendered our community, public, and distance learning institutions.

The NAEB's Programs for the Disadvantaged 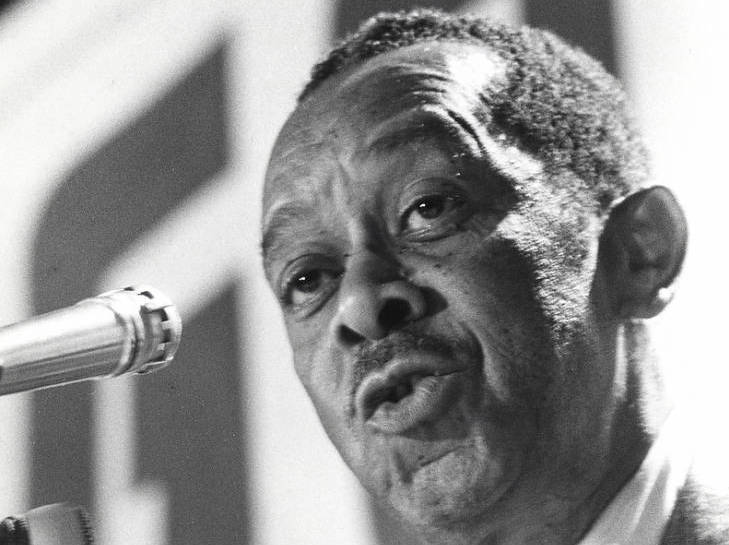 In May 1968, the NAEB launched an initiative called Programs for the Disadvantaged meant to “examine the role of educational broadcasting regarding programming and employment practices for minority groups.” Led by Kenneth A. Clark, the newly formed team surveyed and advised member stations on outreach to disadvantaged communities through programming, technical training, and education. Highlighted in this exhibit are two examples of programming showcased by Programs for the Disadvantaged: The Negro American, a radio lecture series by Professor Benjamin Quarles of Morgan State College, Baltimore, made in late 1967 in Detroit Public Schools, and Seeds of Discontent, which was written, produced, and hosted by Hartford Smith, Jr. and WDET out of Wayne State University in Detroit.

The NAEB’s Cold War: The Ambitions and Tensions of “People Under Communism”

People Under Communism, a 21-episode series that was produced and distributed between 1951 to 1953, was the most ambitious and complicated series that the NAEB ever created. Through a mix of seven sonically rich one-hour programs with high production values, thirteen half-hour or hour long lecture/expert conversation-centered episodes with much lower production values, and one imported thirty-minute BBC documentary, People Under Communism forcefully called out and criticized Soviet propaganda and thought control in nearly every episode. But in its intermingling of cutting-edge foreign policy research about the escalating Cold War with polished dramatic sonic aesthetics akin to high-end commercial programs, People Under Communism itself serves as an interesting case study of the line between education and propaganda.

The forerunner of CPB and its arms, NPR and PBS, the NAEB developed and distributed educational radio programs and accompanying print materials to schools and communities across the United States. What’s more, the NAEB lobbied extensively to unlock the airwaves—to access precious frequency space—in order to bring the voices of poet Robert Frost, architect Frank Lloyd Wright, anthropologist Margaret Mead, and conservationist “Ranger Mac,” among many other individuals, into American homes and classrooms.

The NAEB’s history is the dramatic story of idealists who believed in the utopian possibilities of technology for education and social uplift and who faced considerable challenges in pursuit of those goals, including economic depression, world war, and the scarcity of the electromagnetic spectrum. It’s a story that has much to tell us about 20th century American culture, as well as the 21st century’s environment of online educational technology and podcasting that we live in today.

Despite its historic importance and contemporary relevance, most of the NAEB members’ programs were never heard again after their initial brief moments on the air. The archives for the radio programs and their related paper documentation have been split for over 25 years between two institutions: the University of Maryland and the Wisconsin Historical Society. Unlocking the Airwaves reunites the split collections, ﬁnally realizing the potential of the collections of the NAEB for exploration and and the broader public.

Read More about the ProjectExplore the Archive