Unlocking the Airwaves: Revitalizing an Early Public and Educational Radio Collection is a comprehensive online collection of early educational public radio content from the National Association of Educational Broadcasters (NAEB). The forerunner of CPB and its arms, NPR and PBS, the NAEB developed and distributed educational radio programs and accompanying print materials to schools and communities across the United States. What’s more, the NAEB lobbied extensively to unlock the airwaves—to access precious frequency space—in order to bring the voices of poet Robert Frost, architect Frank Lloyd Wright, anthropologist Margaret Mead, and conservationist “Ranger Mac,” among many other individuals, into American homes and classrooms.

The NAEB’s collections have much to tell us about 20th century American culture, as well as today’s environment of online educational technology and podcasting. Despite its historic importance and contemporary relevance, however, most of the NAEB members’ programs were never heard again after their initial brief moments on the air. The archives for the radio programs and their related paper documentation have been split for over 25 years between two institutions: the University of Maryland and the Wisconsin Historical Society.

Unlocking the Airwaves reunites the split collections, ﬁnally realizing the potential of the collections of the NAEB for exploration, research, and reflection. We anticipate the resource will prove useful to a wide range of users (including teachers, scholars, journalists, and genealogists) interested in an even wider range of subjects (African American history, Women's history, the Cold War, environmental conservation, and poetry, to name just a few). But no matter what topic interests you, it is helpful to know some background information about the NAEB.

The NAEB’s institutional hands touched every item in this collection—in some cases as a creator, in others as a distributor, and sometimes merely filing away something of interest that arrived in the mail. Understanding the NAEB as an organization provides a richer context for interpreting the documents and recordings accessible through this website.

The NAEB began in 1925 as the Association of College and University Broadcasting Stations. From its inception until its dissolution in 1981, the faculty and staff at large public Midwestern universities played key leadership roles within the organization. The story of the NAEB is, therefore, the intertwined stories of broadcasting initiatives at the University of Wisconsin, University of Illinois, University of Minnesota, and the Ohio State University, to name just a few of the most active and prominent players. It is perhaps fitting that media archivists and scholars at two Big 10 universities are at the helm of Unlocking the Airwaves.

The professors and university staff members who devoted themselves to the NAEB were idealists, believing in the utopian possibilities of technology for education and social uplift. Radio held the potential to bring dynamic voices into the classroom, as well as educate adults who never had the opportunity to attend college—or, in many cases, finish high school. The NAEB’s leaders faced considerable challenges in the pursuit of these goals, including economic depression, world war, and the scarcity of the electromagnetic spectrum.

The NAEB Newsletter (pictured below, in three of its typographic iterations) provides a window into the organization’s efforts and priorities. During the 1930s, advocacy efforts to the FCC took center stage; the NAEB lobbied the government for bigger and better frequency allocations for educational stations. While advocacy efforts did not go away during the 1940s, it did become subordinated to the war effort and the coordinated distribution of recorded programs.

The NAEB’s most productive period as a creator of programs occurred during the 1950s, with its work on ambitious series such as People Under Communism and The Jeffersonian Heritage (featuring character actor Claude Rains in the role of Thomas Jefferson). In the late-1950s, the NAEB sponsored the innovative research study, “Project in Understanding New Media,” led by media theorist Marshal McLuhan. The organization also devoted considerable resources toward the development of educational television. 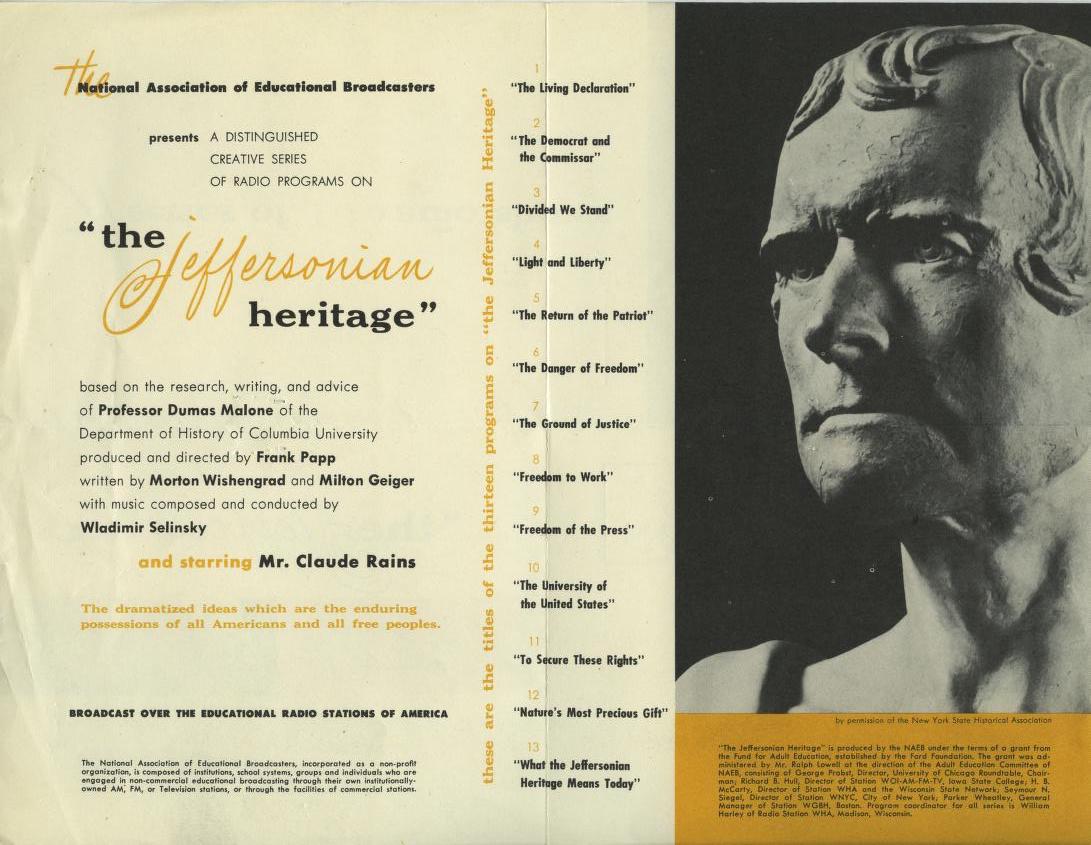 Although the NAEB continued to exist until the early-1980s, the organization’s vitality gradually diminished across the 1960s and 70s. In some ways, the NAEB was a victim of its own success: the decades of federal lobbying contributed to the creation of CBP, PBS, and NPR. Additionally, the NAEB had a challenging time adapting to the shift from “educational media” to “public media”—a new landscape in which conversational broadcasting styles were preferred over on-air lectures. In the new environment of public media, large-market stations (e.g. WNYC, WGBH, KQED) wielded far more power than the university stations that had led the NAEB (e.g. Madison’s WHA and Columbus’s WOSU).

Yet if the NAEB is today forgotten as an organization, the legacy of its initiatives, ideas, and actions are still widely felt. Anytime a listener downloads the TED Radio Hour podcast to their iPhone, or turns on the car radio and hears Terry Gross interviewing an author on Fresh Air, that listener is participating in a 100-year-old tradition of utilizing audio broadcasting to educate and inform the American public. And while it would take internet networks to provide an infrastructure for MOOCs (Massive Open Online Courses), the concept was championed by radio enthusiasts at Midwestern universities in the 1920s and 30s.

The NAEB made history—and preserved its own history, too. Newly digitized and reunited, the NAEB’s collection of recordings, publications, and manuscripts provide essential sources for the study of American broadcasting, society, and culture.

Unlocking the Airwaves employs a minimal computing application design, which combines static site generation, client-side web framework and indexing technologies to reduce long-term maintenance costs. The application uses Airtable for distributed data curation, and the Internet Archive as a data publishing platform. These approaches allow us to examine facets of digital collection building and maintenance that have been explored with “standard” online platforms and software, but which have not been investigated in minimal computing environments.

The application website itself is generated using Gatsby, an open source static site web publishing framework based on React. The client side search functionality uses Elasticlunr for indexing the OCR derivatives of the scanned images (ABBYY FineReader) generated by the Internet Archive ingest process.

Since the Internet Archive offers integration with the International Image Interoperability Framework (IIIF), the project team made the decision to use the IA as part of our digitization workflow, not only for redundant storage/access points and creating derivatives for all scanned materials, but also so we could utilize the Mirador image viewer. Mirador supports the IIIF standard, and the new version is written in React, which dovetails nicely with Gatsby.

NAEB program MP3 audio files and their WebVTT transcripts are stored as a BagIt package in a publicly accessible Amazon Web Services S3 bucket. The Airwaves project developed a reusable React component webvtt-player that employs native browser support for WebVTT to display and interact with the transcript while playing the audio.

The Unlocking the Airwaves website includes a rudimentary API in the form of a series of web accessible JSON files that are derived from Airtable during the site build process. These files are used by the client side web application, and are listed here in the hopes that they are useful in other contexts:

The IIIF manifests for objects in documents.json can be obtained by using the object's iaId property (Internet Archive ID) to construct the following URL:

Similarly all the image and OCR assets for a document can be downloaded from:

Finally the audio and transcripts for objects in the episodes.json can be downloaded from the Amazon S3 bucket using the aapbId (American Archive of Public Broadcasting ID) to construct the following URLs:

Each NAEB program also has its own RSS podcast URL, which you can construct using the id for the series found in series.json:

Additionally there is OPML file that lists all the podcasts.

Questions about the technical details and data are welcome using the project's issue tracker on GitHub or by contacting the project directors.