In 1951 The Ford Foundation, one of the largest and most important philanthropic organizations in the world, established a new, independent organization whose goals closely aligned with those of the NAEB and its Adult Education Committee - the Fund for Adult Education (FAE). The mission of the FAE was helping the American people “develop and maintain a maturity and steadiness of national conduct proportionate to their world responsibility.“ Its main concern was “with that part of the educational process which begins when formal schooling is finished” (Burch 54).

Under Chair George Probst of the University of Chicago, the Adult Education Committee of the NAEB had outlined four main subject areas in which to concentrate - The American Heritage, The Nature of Man, International Understanding, and Public Affairs. When shortly after its inception the FAE awarded the NAEB a grant of $300,000 to produce its initial set of offerings, the first program to receive the greenlight was what would eventually be called "The Jeffersonian Heritage."

The NAEB’s initial press release on the program described it this way:

Based on the published work and continuing research of Jefferson historian Professor Dumas Malone, then of Columbia University, the series benefitted from his involvement in the editing process as well. Dr. Malone, who also held positions at Yale and the University of Virginia over the course of his long and impressive career, was awarded the Pulitzer Prize in History for his five-volume opus* Jefferson and His Times* in 1975.

Here are the titles of the 13 episodes as broadcast: 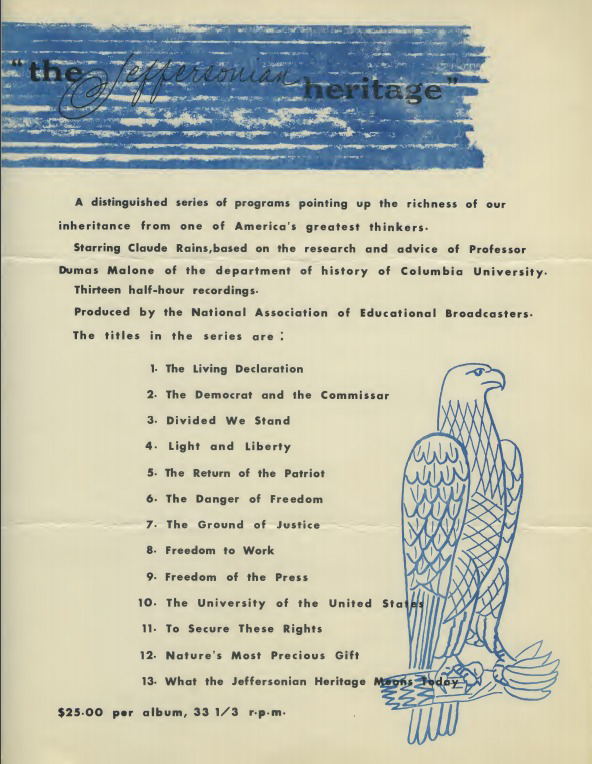 The thirteen half-hour episodes of the series were written by Morton Wishengrad, Milton Gieger, Joseph Mindel and George Probst, with music by Vladimir Selensky. Frank Papp (moonlighting from NBC) wore two hats as producer and director. The actor chosen to play Thomas Jefferson was the popular and versatile Claude Rains, well known to US film audiences for playing villains (Prince John in The Adventures of Robinhood for one), the occasional hero (secret agent John Stevenson in The Last Outpost) and most memorably, characters of “flexible” morals like Captain Renault in Casablanca. 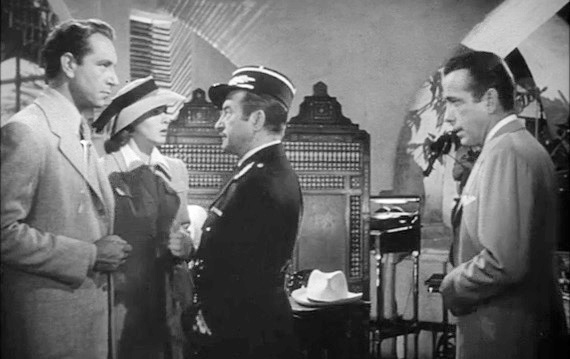 Rains (who became a US citizen in 1939) had begun his career in his native England on the stage before coming to Hollywood and had developed his voice into an exquisite and instantly recognizable tool.  No newcomer to radio, he gave Jefferson a warm, intelligent, and aristocratic tone.  “He is reading his lines straightforwardly and without undue vocal flourishes,” wrote Jack Gould of The New York Times, “[H]is is an excellent performance.”  Gould praised all involved, calling the production “of the highest network caliber.”

The Jeffersonian Heritage is being made available at cost to stations throughout the country, and the series should have the widest possible circulation for one sound reason: it is a good show and a stimulating one. The Fund for Adult Education, The Ford Foundation and the National Association of Educational Broadcasters are off on the right foot. ‘The Jeffersonian Heritage’ has Its Premiere on WNYC with Claude Rains in the Lead Role. (Gould 22)

As Gould suggested, the program was made available not only through the seventy current members of the tape network but was offered to any station that wanted it for the price of the 13 episodes on LP records - $25.00. This allowed for something like a simultaneous national roll-out – though broadcasts of the program were not aired at the same time on each station, a critical mass of national and local publicity on and around the middle of September 1952 helped make "The Jeffersonian Heritage" a bona fide hit.

There were some conditions attached to this generosity, however. The NAEB was not trying to make money, but to gain audience, so it did not follow any of the standard rules for syndicated transcribed programming of the time. Non-NAEB stations running the program were asked to air it weekly in a consistent time slot, unedited and free of commercials or sponsorship, as a “sustaining” program. There were no “exclusivity” guarantees either. If three radio stations in one area all wanted to run the program that was all to the good in the NAEB’s view.

Eventually, these rules would be relaxed a bit, as when WHAS in Louisville, Kentucky received permission to air all thirteen episodes in marathon fashion on Jan. 14, 1953. The series was also distributed to other English language outlets, both foreign and US-affiliated, such as the previously mentioned BBC and CBC, the Voice of America, and the Armed Forces Radio Service. It was universally praised wherever it was heard.

This first series produced and distributed by the NAEB also became the basis of the first book published by the organization when all thirteen program scripts, with additional commentary by Dumas Malone, were published in 1953 Though individual radio program scripts had been published before (Archibald MacLeish’s Fall fof the City and Norman Corwin’s On a Note of Triumph for example), it was unusual to make every script of one program available in this way. The book was nearly successful as the radio program however, going through three printings by 1955. 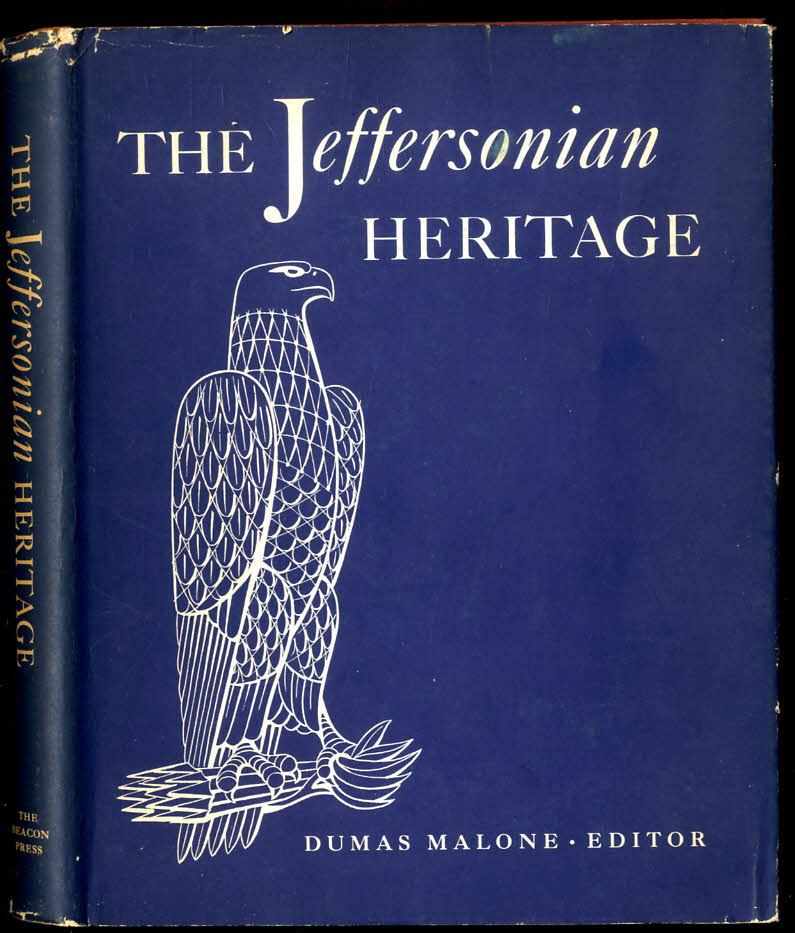 George Probst, Chair of the NAEB’s Adult Education Committee and author of two of the program’s thirteen episodes, put it this way in accepting the congratulations of C. Scott Fletcher of the Fund for Adult Education: 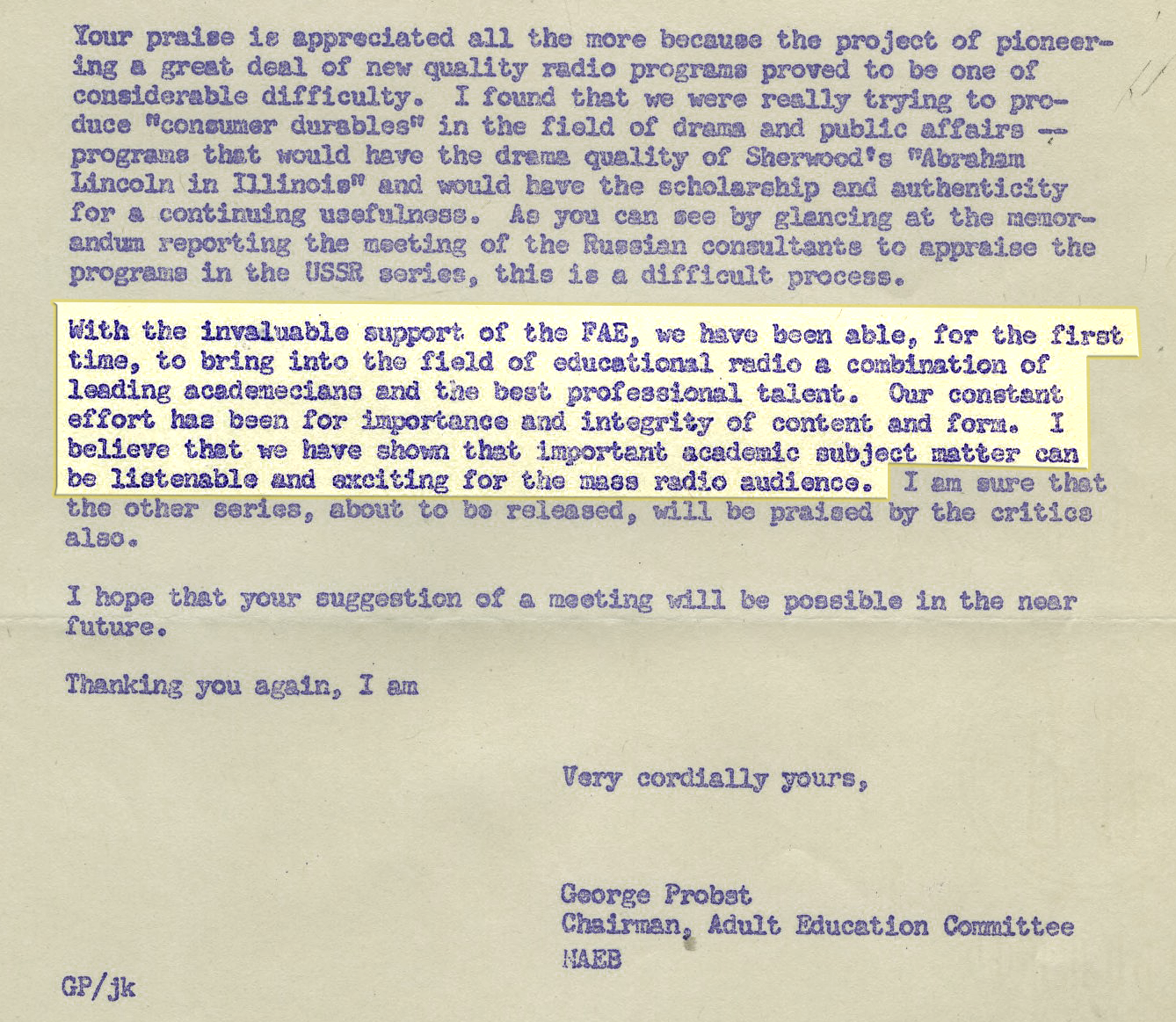 Gould, Jack. “'The Jeffersonian Heritage' Has Its Premiere on WNYC With Claude Rains in Lead Role,” The New York Times, September 15, 1952. Available online (with subscription) at The Times Machine.

Chuck Howell is the Librarian for Journalism, Communication & Cinema and Media Studies for the University of Maryland Libraries. Prior to his current appointment, he spent 21 years working with the University’s Broadcasting–related collections, known collectively as Special Collections in Mass Media & Culture. Chuck is a member of the Academy of Certified Archivists, and serves as a member of the Board of the Mid-Atlantic Regional Moving Image Archive (MARMIA). He has contributed to several media – related works, including Talking Radio: An Oral History of Radio in the Television Age, the Encyclopedia of Radio and Methods of Historical Analysis in Electronic Media.

This series dramatizes the ideas of Thomas Jefferson, which are "the enduring possessions of all Americans and all free peoples," while being "authentic in historical spirit" and "imaginative in form."

1952 and 1953 Correspondence and documentation relating to the NAEB radio program Jeffersonian Heritage. Internal NAEB correspondence and correspondence with radio stations and printing companies regarding distribution of tapes, advertising, and supplementary materials, as well as press coverage of the series.

"From the Billboard" Section of the NAEB Newsletter, November 1952

Reviewed at a special pre-broadcast hearing at WNYC, New York. "In an attempt to imbue the program with a genuine feeling of history in the making, the script often subordinates dramatic action to Jefferson’s philosophy. Consequently Rains delivers lengthy first-person narratives and completely dominates all of the dramatized segs. In most cases other cast members do little more than feed him lines ... the series is 99% dependent upon the stature of its leading performer. Fortunately, the NAEB realized this, and spent a sizable share of its Ford bankroll to snare the right man for the role—Claude Rains. The legit-flicker star’s flexible vocal range and quietly authoritative underplaying enables him to sustain audience interest thru-out soliloquies which would totally defeat many an able actor."

"The sets of series are planned to fit into a broad pattern of four main outlines — The American Heritage, The Nature of Man, and International Understanding and Public Affairs. Since the project is flexible, the ideas to be worked out in some of the later programs and their presentation Will depend in some measure on public response to the opening series ... this radio venture will seek to make real and vibrant the principal features of the American Heritage as passed down from Thomas Jefferson through a national history richly endowed with his ideas. These features are seen as one rich, fair land, offering vast opportunities; one diverse people, melted into a national unit; one background of knowledge and skills inherited from the many races of our ancestry; and lastly, the timeless and universal ideas of a new land."

From a May 1953 NAEB newsletter announcing the 21 winners of the 17th American Exhibition of Educational Radio and Television Programs: "In Group I (Programs Heard Nationally by Network or Transcription) the NAEB-FAE series "The Jeffersonian Heritage" won the first award in Class 4 (Cultural Programs). The citation reads 'An outstanding document in which the best elements of writing, acting, production and direction combine to present an historically accurate record of a significant American tradition. The series makes an invaluable contribution to the understanding of democratic principles without resort to jingoism. Equal in merit to the best commercial network, programs 'The Jeffersonian Heritage' proves that educational radio can successfully appeal to a mass audience.'"

From an NAEB progress report to the Fund for Adult Education: "The Jeffersonian Heritage has become perhaps the best-known set of radio or recorded programs in the world on the meaning, in understandable form, of democracy, liberalism and the American way of life. 331 albums, and 3953 books of scripts for this series have already been distributed."